February 19, 2013
A 29-year old man died due to drug overdose at the Intensive Care Unit of the Thimphu national referral hospital, on Monday. The 29-year old was brought in a state of coma to the emergency ward at around 5:30 pm on 4 February. Hospital staff had recovered some Spasmo Proxyvon and white tablets from the deceased’s pockets. This is not the first death under such conditions, as records with concerned agencies reflect 41 such deaths in a span of 10 years. What is disturbing is that Drug overdose deaths have also been increasing rapidly in the last few years particularly from 2007 onwards till date highlighting the increasing number of people falling victim to drug addiction. The sheer volume and increasing accessibility of drugs is also making it difficult for the police to stop the flow of Bhutan’s drug trade. There is an increase in the number of mainly young people getting hooked to the substance. Though the problem threatens to over swamp sections of Bhutanese youth the
Post a Comment
Read more

April 09, 2011
Thimphu: The Royal Bhutan Police are still looking for those behind four high-profile killings of 2010. They have even sought the help of Interpol to help track them down. While two of the suspects are believed to have absconded from the country, the third, allegedly a non-Bhutanese, is also still at large. A senior police officer said that the hunt is very much on, with information being shared with law enforcement counterparts outside the country to help nab the killers. The photos of the suspects displayed on Interpol website.   “The Interpol office for RBP in Thimphu has shared information with other Interpol member countries of the region about those on the wanted list,” the officer said. Among the killings, the first occurred on September 5 at Kulagangri hotel in Thimphu. Gyem Tshering, a 25-year old from Pangserbo village, Drujeygang gewog in Dagana, was found stabbed at five different places on the body. The killer was later identified as Ugyen Lhendrup, a 32-year old man from
1 comment
Read more

Just shy of the border

April 09, 2011
Thimphu: A 33-year old man from Trashigang was spared the full brunt of the tobacco law for bringing in the contraband just outside the border point between India and Bhutan on February 25. When the district court in Samdrup Jongkhar passed its verdict on March 22, Cheku Dorji received just half the sentence – one year and eight months – because when arrested, he was a few yards short of the Bhutanese territory. This happened because the Gelephu-Samdrup Jongkhar bus in which he was a conductor usually stops for inspection just outside the gate. As a result, not only is the punishment lighter but Cheku Dorji can pay Nu 60,000 in lieu of the sentence. He was caught with 200 pieces of cigarettes and 600 packets of Baba (chewing tobacco) which he had hidden in a box concealed near the driver’s seat.   When the police asked him to open the box, he confessed having the tobacco products. He even went to the extent of confessing that he intended to sell them in Kanglung in Trashigang. “He was
1 comment
Read more

April 09, 2011
Thimphu: Yet another person - a bus driver - was convicted for tobacco smuggling. Twenty nine-year old Ambar Biswa from Dagana, working for Sernya Transport, was sentenced to three years in prison on April 4 by Chhukha dzongkhag court. The judgment stated that Ambar Biswa’s act had violated section 52 of the Tobacco Control Act and was thus liable for fourth degree felony. He was arrested at Tanalum checkpoint for carrying 10 packets of chewing tobacco (Baba) and two packets of cigarettes which were hidden in the bus’ dashboard. In his statement to the police, the convict said the tobacco products, supposedly bought in the border of Jaigaon, West Bengal, were meant for his personal consumption. Bhutan TODAY learnt that the convict is unhappy with the judgment and will appeal to the High Court. Ambar Biswa was released on bail after paying Nu 3,000 on March 28 but was later detained on the order of the court.
Post a Comment
Read more

December 24, 2010
Thimphu: Will mishaps ever stop happening lately? The principal of Autsho primary school was killed on the spot while another succumbed to injuries later when the car they were travelling in veered off the road near Phaling near Lhuentse Dzong. Needup Dorji, the school principal who was in his early 50s, was driving his Santro car along with two passen­gers - Jambay, 54, and Tshagayla, both cooks of Tshangkhar School in Jarey gewog – when the accident took place around 3:00 pm. According to the officer in-charge of Lhuentse Police station, the princi­pal had died on the spot while Tshagayla died in the hospital later. Jambay who is in his mid-thirties, however, is in a stable condition. The principal had gone to the dzong for some official work and was on his way back to Autsho when the car fell about 60 meters below the road. “The principal could not negotiate a bend and the car went straight off the road,” said Jambay, the survivor. “When I opened my eyes I found myself lying in the
Post a Comment
Read more

December 24, 2010
Thimphu: A two-storied house in Bjemina, Thim­phu, was razed to the ground by fire yesterday evening. Despite having four fire engines at the scene, the house could not be saved and a refrigerator was the only item that was sal­vaged in the end. The fire had started at around 5:00 pm. It was first noticed by one of the tenants living on the second floor.  She had gone out to fetch water when she spotted the fire burning at one corner of the house. At the time of the in­cident, there was no one in the house except for a 10-month old child who was fortunately saved by the mother. The ground floor was used as a restaurant while the upper floor had three units in which the labor­ers working at a nearby quarry lived. The fire could have started due to a short circuit or from a bukari, according to the police. The house belonged to the Singye group of companies. The property destroyed is estimated at around Nu 250,000. An eye witness said that if there was no timely intervention by the fire
Post a Comment
Read more

Investigation on for Lam Peri accident 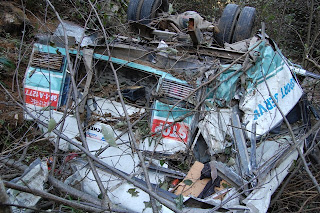 Thimphu: Over-loading, negligent driving and mechanical failure have emerged as the probable causes of the Lam Peri bus accident which killed nine and injured 28 people on December 22. While the director of the Road Safety and Transport Authority (RSTA), Tashi Norbu, said the driver will be held responsible for carrying 37 passengers, 15 more than the capacity, RSTA’s regional transport officer (RTO) in Thimphu, Dophu Dukpa, did not rule out mechanical failure as the cause. According to Dophu Dukpa, the 24-year old driver claimed that the bus’ engine stopped all of a sudden at the accident spot. The steering got jammed, the brakes ceased to respond and the bus plunged 519 feet below the road. Some of the passengers corroborated the driver’s claims. A 36-year old passenger who was sitting next to the driver said that the egine ceased to function when the bus reached the accident site. “It is very difficult to come to any conclusion as to what caused the accident as the bus is totall
Post a Comment
Read more
More posts

Cee Dee Jamtsho
Thimphu, Bhutan
Well ! A person full of fun and with a responsibility to inform the nation the truth. being the voice for voiceless !!!!